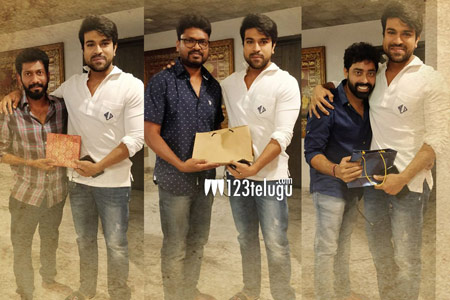 Mega Power Star Ram Charan is celebrating his 33rd birthday today. On this occasion, he personally gave some memorable gifts to Rangasthalam team of writers Srinivas Rongali, Buchibabu Sana and Kasi Vishal, who worked very hard throughout the making of the film.

Charan even threw a big bash for them last night. On the other hand, Charan’s upcoming village drama, Rangasthalam, is all set for a grand release on March 30th. Very much satisfied with the output, Ram Charn is eagerly awaiting the film’s release.

Directed by Sukumar, Rangasthalam has Samantha as the female lead. Mytri Movie Makers have produced it and DSP has composed some foot tapping tunes.