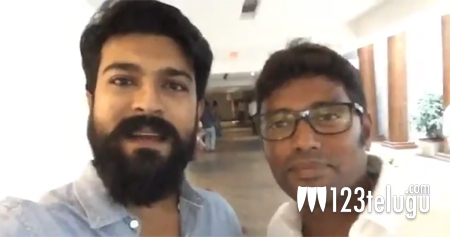 The shooting of Ram Charan’s much-awaited period drama, Rangasthalam 1985, has been going on in full swing. The film is being shot by ace lensman Rathnavelu. Today is Rathnavelu’s son Adith’s birthday and Ram Charan gave him a sweet surprise.

In a video message, Charan wished Adith a very happy birthday and went on to surprise the birthday boy by saying that he is sending his father to be with him on this special day. Rathnavelu flew down to Chennai to celebrate Adith’s birthday. He later took to Twitter and thanked Charan for his wishes.

My dear son Adith wish u a Happy Birthday !! Thank you Charan for your wishes n love @KonidelaPro pic.twitter.com/04Ad1VqJfn