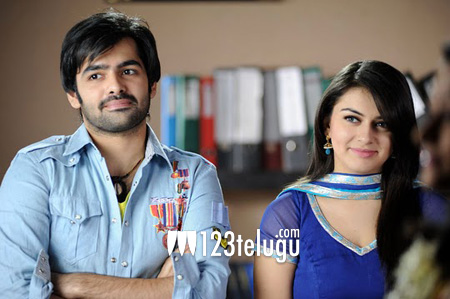 Ram and Hansika are going to team up once again for an upcoming Telugu film titled ‘Pandaga Chesko’. In the past, the duo had acted in Maska and Kandireega and out of these two films, Kandireega turned out to be a huge hit. Gopichand Malineni is going to direct the film and Parachuri Prasad is producing it under United Movies banner.

The film is said to be a complete action and love entertainer and a huge chunk of the film will be shot in the US. Preparations are already underway for a long schedule in the US and the film will go on floors in April. Last year, Ram was seen in Ongole Githa and Masala; however, neither of these films managed to set the cash registers ringing.

‘Pandaga Chesko’ is an important film for both Ram and Gopichand Malineni. While Ram is looking for an elusive hit, Gopichand Malineni is eager to continue the success streak, especially after scoring a big hit like Balupu. Thaman will be scoring the music for this film.