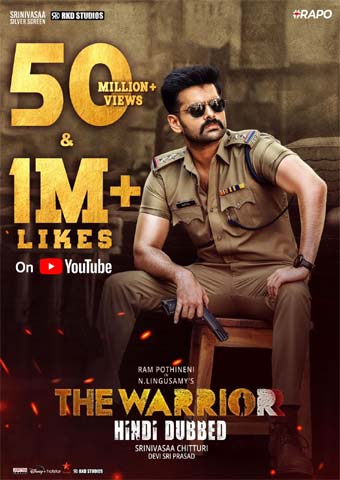 Tollywood young actor Ram Pothineni enjoys a huge following among Hindi audiences, and his Hindi-dubbed films rake in hundreds of millions of views on Youtube. The cumulative total of all his movies is over 2 billion, which proves the same. In the form of Nenu Sailaja (The Super Khiladi 3), Ram already has a 500+ million views Hindi dibbed film.

The recent film of Ram, The Warriorr, is currently ruling Youtube with over 50 million views and 1 million likes. Ram’s other films Vunnadhi Okate Zindagi (No 1 Diwali – 262 million), Hyper ( S/O Satyamurthy 2 – 110 million), and Ganesh ( Kshatriya – 105 million), have received a fantastic reception from the North audience. His Hello Guru Prema Kosame, Dumdaar Khiladi in Hindi, is about to breach 500 million shortly.

At this pace, The Warriorr is all set to create some new records in the Hindi digital space showing his fan following. Ram’s next movie is with sensational mass director Boyapati Srinu. This is the first PAN Indian project for the actor and is expected to make the masses go crazy with Ram’s charisma and Boyapati’s taking.