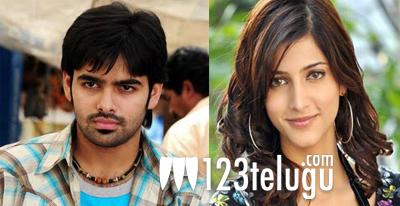 Tollywood heartthrobs Ram and Shruti Haasan are going to team up for the first time ever for an untitled film in Santosh Srinivas’ direction. Santosh Srinivas had earlier made his debut as a director with Kandireega which had Ram in lead role and it was a roaring success at box office. Bellamkonda Suresh had produced that film. Now, the three are teaming up once again for another mass entertainer.

The film was launched few months ago; however, no progress was made for quite sometime now. In fact, Santosh Srinivas and Bellamkonda Suresh got into a tiff with each other over the film’s script, but that issue seems to have been put to rest now. The film will go on floors shortly and more details about the film will be announced soon. Meanwhile, Ram is busy shooting for Bhaskar’s Ongole Gitta and Shruti Haasan is juggling between the sets of Prabhu Deva’s film and Arjun Rampal’s D Day.