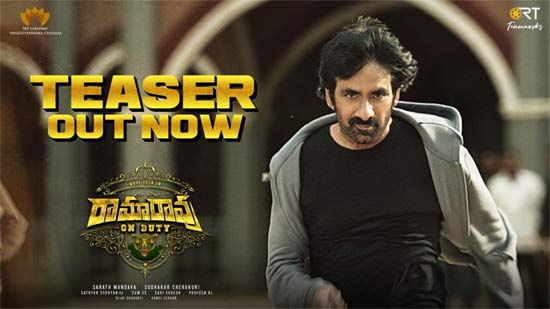 Mass Maharaja Ravi Teja’s new movie, Ramarao On Duty is in the last leg of its shoot. Directed by the debutant Sarath Mandava, the movie’s teaser has been released today online.

The teaser looks good and is a pack of action sequences. It showcases Ravi Teja as a sincere and duty minded Deputy Collector of Visakhapatnam who doesn’t spare anyone going against the law. The teaser also shows another side of the character as a do-gooder for the needy. It has many action blocks alongside powerful dialogues.

Divyasha Kaushik and Rajisha Vijayan are the leading ladies in this movie. Produced by Sudhakar Cherukuri of SLV Cinemas and RT Teamworks, the action thriller has Venu Thottempudi, John Vijay, Nassar, Naresh, Pavitra Lokesh and others in significant roles. Sam CS is the music director of Ramarao On Duty.