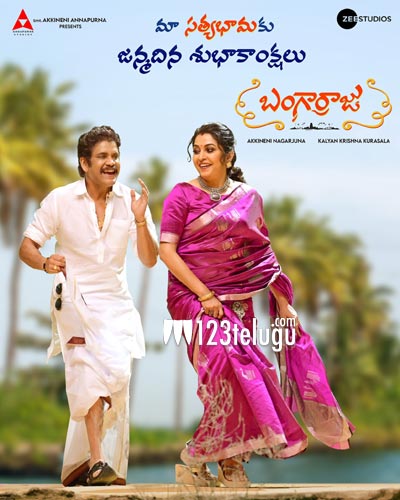 Senior heroine Ramya Krishna is celebrating her birthday today. On this special occasion, the makers of her upcoming fantasy drama, Bangarraju, unveiled a special poster revealing her first look. Dressed in a pink saree, Ramya Krishna looks attractive as ever.

The poster also features Nagarjuna in a playful mood with his ‘Satyabhama’, as they both run on the riverside. Their on-screen chemistry will be something to watch out for once the film hits screens. Ramya Krishna played Bangarraju’s wife in the 2016 Sankranthi blockbuster, Soggade Chinni Nayana. She is now reprising her role in Bangarraju, a spin-off to Nag’s role in SCN.

Bangarraju’s third schedule is currently underway at Ramoji Film City. Also starring Naga Chaitanya and Krithi Shetty in lead roles, the Kalyan Krishna directorial is being produced by Nagarjuna’s Annapurna Studios and Zee Studios banners. Anup Rubens is composing the soundtrack. The makers are planning to release the film for Sankranthi early next year.
Attachments area