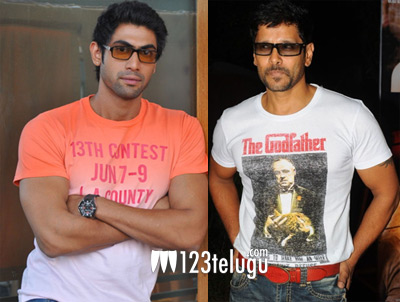 Update at 1pm (IST) 18th Feb :  The matter has now been resolved. Apparently, Vikram was misquoted in the interview and Rana has revealed that the matter is now behind them.  “Spoke to actor Vikram finally, says its a misquote from what he actually said. Glad the air is cleared apologies to him and his fans for my harsh reaction.”, said Rana

Rana Daggubati has been tried his best to make a name for himself in Bollywood. After his debut in Telugu with Leader, he bagged one of the lead roles in Rohan Sippy’s Dum Maaro Dum and later acted in RGV’s Department. He has been trying his best to bag good offers. But it looks like his efforts haven’t impressed Vikram. He had recently appeared in a Hindi film titled David which sunk without a truce at box office. In a recent interview when Vikram was asked why South Indian actors have not managed to find success in Bollywood, Vikram quoted Rana’s example and said, “Look at Rana Daggubati. He started in the Telugu industry and came to Bollywood but he hadn’t made any headway in the south. Now he’s not bothered about the Telugu industry. To work in Bollywood, I have to leave everything and come here.”

Naturally, the comments have not gone well with Rana. He blasted Vikram for the unwarranted comments and said that Vikram should first concentrate on his career. “Dear Mr.Vikram I see you quote me and my directions in quite a few media interactions of yours recently. It is best if you focus on your career that isn’t headed in the right direction with close to 10 odd disasters in your kitty I’m barely 2 1/2yrs old as an actor and you are almost close to 25yrs. Stay put on urs as I am on mine 😉 not take anything away still a huge fan of few of your films ;)”