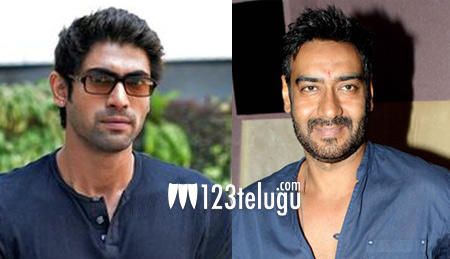 After making his debut in Telugu with Leader in 2010, Rana Daggubati got lucky within a short span of time and got a big offer in Bollywood. However, his much awaited debut in Bollywood, Dum Maro Dum tanked at the box-office and his next film Department too didn’t quite impress the audience. Except for a cameo in Yeh Jawani Hai Deewani, it’s been a while since Rana got a chance to share screen space with some of the top names in the industry.

After a long gap, Rana flew to Mumbai recently on an assignment and this time, he has teamed up with Ajay Devgan; however, it was only for a TV commercial. The ad has been directed by Abhinay Deo and both the actors had a great time on the sets. “Always fun shooting in Mumbai, need to come back for more,” Rana posted on Twitter, sharing his excitement.

Currently, Rana is acting in Rajamouli’s Baahubali and he’s playing a lead role in Gunasekhar’s Rudhramadevi 3D. With these two period dramas, it’s going to be an extremely hectic year for Rana.