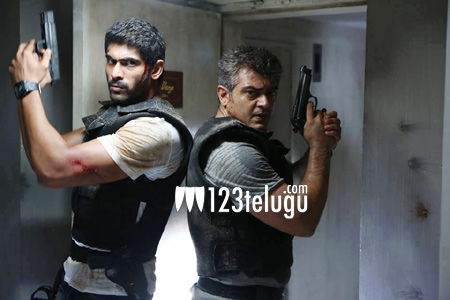 Post the release of Baahubali, macho Daggubati hunk Rana has become the go-to guy for characters that demand towering screen presence. Rana’s powerful portrayal of a menacing Bhallaladeva won him praise and fans from all over the country. As per the latest reports from the Tamil media circles, Rana might be playing in yet another historical film, which will have Ajith as its main lead.

Reports say that Panjaa director Vishnuvardhan has been touring all the ancient temples across Tamil Nadu to prepare a script set in the backdrop of the 9th century Raja Raja Chola Dynasty. Apparently, Ajith will be playing Raja Raja Chola I and Rana too will be seen in an important role. Earlier, Rana, Ajith and Vishuvardhan teamed up for the superhit action thriller, Arrambam.

However, these are only speculations and we will have to wait for the official confirmation from the makers. Stay tuned for more interesting updates regarding this projec.