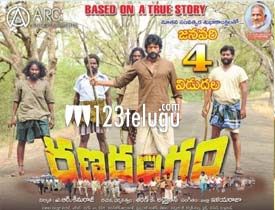 The promotions of Ranarangam were kept on hold as there was no clarity about the release date of their film. Now that the date has been locked to August 15th, the makers have resumed the promotions.

As a part of it, the second song of the film Kannu Kottu will be released tomorrow. Ranarangam is directed by Sudheer Varma and is a gangster drama.

Kajal and Kalyani Priyadarshan play female leads. Sharwa will be seen in two different get-ups in the film.