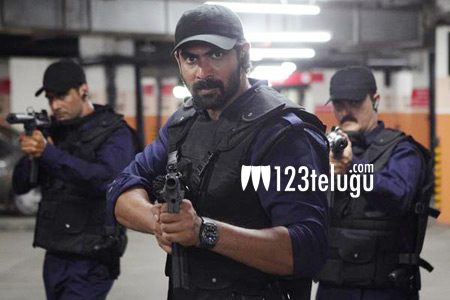 Tollywood hunk Rana Daggubati, is a well known name in Bollywood. His special cameos in films like ‘Dum Maaro Dum’, ‘Yeh Jawaani Hai Deewani’ and RGV’s ‘Department’ got him enough recognition among Hindi audience. The makers of Rana’s next in Hindi, the Akshay Kumar starrer ‘Baby’, organized a special show for press and industry people. Soon after the show ended, the audience was all praises for the film’s brilliance.

Also starring Tapsee, Anupam Kher and Danny, ‘Baby’ is a nail biting spy thriller, and has Rana playing a special officer in India’s Counter Intelligence Unit that fights border and global terrorism. ‘Baby’ has been directed by Neeraj Pandey of ‘A Wednesday’ and ‘Special 26’ fame, and the film is hitting the screens worldwide this 23rd. Thanks to the extremely positive buzz surrounding the film, Rana is sure to get more offers in Hindi films.

This summer, Rana will also be seen in two of the most eagerly awaited period flicks in Telugu, ‘Baahubali’ and ‘Rudramadevi’.