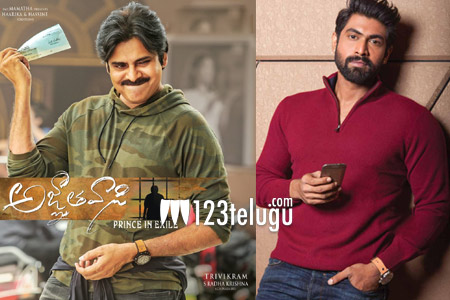 Just a few days ahead of the film’s release, the makers of Power Star Pawan Kalyan’s landmark 25th film, Agnyaathavaasi, received a huge jolt from leading Bollywood production house T Series. The popular music and film production label honchos had sent a notice to Agnyaathavaasi’s producer, alleging that the film has similarities with the hit French film Largo Winch.

Incidentally, T Series had acquired Largo Winch’s remake rights. Apparently, T Series had demanded a whopping 5 crore from Agnyaathavaasi’s makers to settle the issue. This literally shocked the producers, who were about to release the film in a few days.

In this scenario, Rana Daggubati, who has close contacts in Bollywood circles, immediately intervened to solve the issue. Rana is said to have personally spoken to the T Series heads and settled the issue for just 70 lakhs towards compensation. With this, all lines are cleared for Agnyaathavaasi’s release and everyone can now heave a huge sigh of relief.