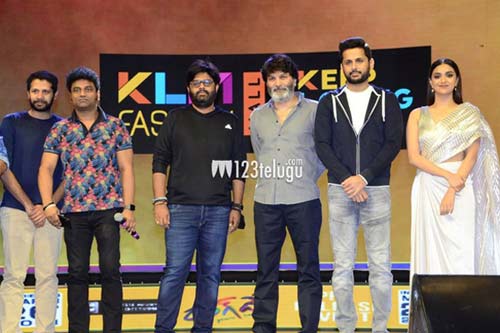 Star director Trivikram was the chief guest at the pre-release event of Nithiin and Keerthy Suresh’s upcoming romantic entertainer, Rang De. Speaking at the event, Trivikram said that Nithiin and Keerthy play A(rjun) and A(nu) in the movie and went on to wish the film a bigger success than his film A..Aa.

“Animals can see only in black and white whereas humans are blessed with the ability to see the seven colours. Rang De will show you all those seven colours in your lives,” Trivikram said. The director was all praise for his longtime collaborator and star composer Devi Sri Prasad. He said that DSP has been ruling the number one position since long as he came from a classical music background.

Directed by Venky Atluri, Rang De has been produced by Naga Vamsi. The film is gearing up for release on March 26.