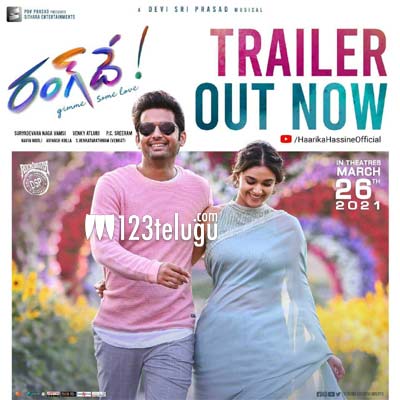 Young stars Nithiin and Keerthy Suresh’s romantic comedy, Rang De, is gearing up for release on March 26. The makers have just unveiled the film’s theatrical trailer, which assures that the film will be high on comedy, romance and even emotions.

Rang De’s trailer showcases how Nithiin and Keerthy’s characters share a Tom and Jerry-like relationship since their childhood. How they marry each other and how an emotional conflict disrupts their relationship seems to be the main story in this Venky Atluri directorial.

Naga Vamsi is bankrolling Rang De and DSP has composed the music. PC Sreeram has cranked the camera.