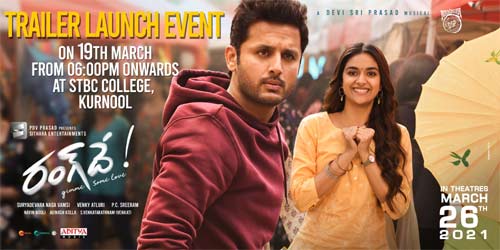 Here comes an exciting update for all the fans of young stars Nithiin and Keerthy Suresh. The theatrical trailer for Rang De will be launched on March 19th at a special event which will be held at STBC College in Kurnool. The film’s entire core cast and crew members will be attending the event.

Rang De is slated for release on March 26. The film’s colorful and breezy promos have raised the expectations on this romantic entertainer. Venky Atluri is the director and Naga Vamsi is the film’s producer. Devi Sri Prasad is scoring the soundtrack and legendary cinematographer PC Sreeram has cranked the camera.