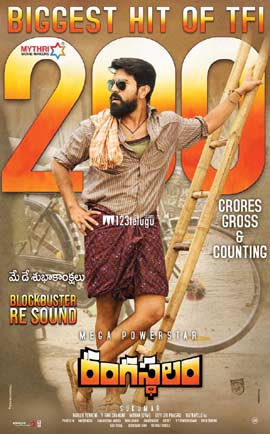 And finally, Ram Charan’s blockbuster period village drama, Rangasthalam, has pulled off a memorable feat. The film has officially broken into the rare Rs 200 crore gross club, becoming the first Telugu movie to achieve the feat after the Baahubali franchise.

Rangasthalam released on March 30 to unanimous positive response from all quarters. The film has collected nearly Rs 116 crore worldwide share so far and registered several non-Baahubali 2 records in the twin Telugu states and in the US. In America, Rangasthalam has grossed close to $3.49 million and is all set to surpass the $3.5 million milestone.

Sukumar directed Rangasthalam and Samantha played the leading lady in it. Aadhi, Jagapathi Babu and Prakash Raj essayed crucial roles in the movie. Mythri Movie Makers is the banner that bankrolled this epic blockbuster.