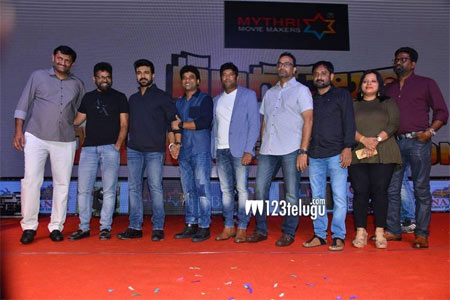 The 100 days celebrations for Ram Charan and Sukumar’s blockbuster rural drama, Rangasthalam, were held in a grand manner tonight. Speaking on the occasion, Charan was all praises for Sukumar and the entire team.

“Rangasthalam is a one man’s dream, and that man is our director Sukumar. Rangasthalam is a powerful thought which came out of Sukumar’s pen. It’s because of his impeccable writing that we all existed in Rangasthalam,” said the Mega Powerstar.

Released on March 30, Rangasthalam went on to collect over Rs 120 crore worldwide share. The film is the all-time third highest grossing Telugu movie. Mythri Movie Makers banner has bankrolled the movie, which had Samantha, Jagapathi Babu and Aadhi Pinisetty in important roles.