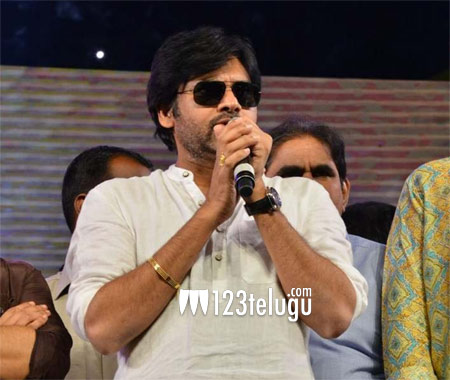 Speaking at Rangasthalam Vijayotsavam, chief guest Pawan Kalyan praised the movie to the hilt. “Rangasthalam is the story of our soil. Telugu pride and prejudice and ego conflicts are authentically portrayed in the movie,” said the Power Star.

“North and South India must form a lobby and send Rangasthalam to the Oscars,” Pawan said amid thousands of cheering fans. “Telugu film industry must keep aside politics and coteries and come under one roof for Rangasthalam like the way it did for Baahubali,” he added further.

Talking about the film’s director Sukumar, Pawan said that he had written stories and failed in the past and that he knows how difficult it is to write a story like Rangasthalam. “Telugu folk will forever be indebted to you,” Pawan told Sukumar.

It was an emotional moment for fans when Pawan kissed his nephew Ram Charan on his forehead and addressed him as his brother. Pawan went on to say that his brother Chiranjeevi is his father and his sister-in-law is his mother.