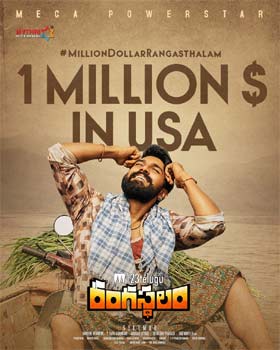 Rangasthalam, the Ram Charan and Samantha-starrer period village drama, is leaving fans and trade circles in awe with its thumping box-office collections in the US. The film has already stormed into the $1 million club.

Rangasthalam grossed $706,612 from the Thursday night premieres. The film, until 10:45 PST on Friday, grossed a staggering $508,203 from 151 locations. With this, the film’s latest US gross totals to $1,214,815. It remains to be seen if Rangasthalam will end up surpassing Ram Charan’s previous best Dhruva’s $1,474 million by Friday night.

Sukumar has directed Rangasthalam and Mythri Movie Makers banner has bankrolled it. DSP is the film’s music composer.