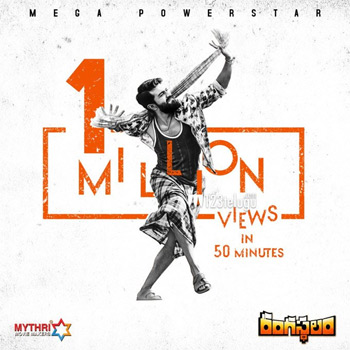 Now that the teaser of the Rangasthalam is out, the social media is abuzz with the positive messages for the rustic teaser of the film. Within no time, the teaser has gone viral and has clocked 1 million views in just 50 minutes.

The teaser has surely gone deep into the audience and Ram Charan’s comic angle has been liked by one and all. The last song of the film is being canned as of now in the Godavari region.

The post-production formalities of the film are on in full swing and Ram Charan will soon start dubbing the film. Sukumar directs this film which has Samantha as the female lead.