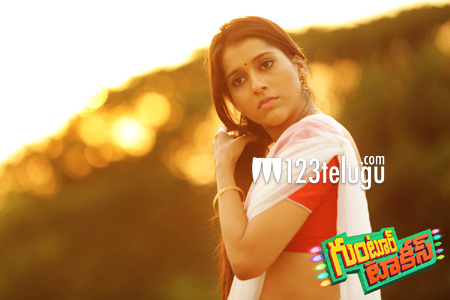 The hot and happening Rashmi Gatuam, is one name which needs no introduction on the small screen. She hosts one of the most viewed comedy show on television and is the cynosure of all eyes.

Though she started as an actress, Rashmi forayed into television and has managed to achieve decent success. She is now back on the silver screen and will be seen in National Award wining director Praveen Sattaru’s Guntur Talkies.

The first look of the film has come out and Rashmi looks simple and elegant as the village belle. Reports reveal that she plays an important character in the film and will impress the audience big time. Rashmi has also a lot of hopes riding on this film which will give the necessary push to her career.

Let’s hope that she hits the bulls eye and manages to impress the audience big time. Guntur Talkies also has Naresh and Sharddha Das in other lead roles.