Star heroine Rashmika Mandanna is utilising the lockdown time to prepare for her character in Allu Arjun and Sukumar’s Pushpa and to connect with her friends and fans. Recently, Rashmika interacted with her fans on Instagram. As expected, the happening beauty was bombarded with some hilarious questions and the actress gave equally cheeky replies.

A fan told her that if God appears in front of him, he will ask him to make him Rashmika’s husband. The chirpy actress took it sportingly and gave a hilarious reply. She posted a picture of her pet dog and asked the fan to “first take permission from him”. Another fan asked Rashmika if she will go on a date with him for 5 minutes like Kajol dated Shah Rukh in Dilwale. “Let me think about it,” Rashmika replied. 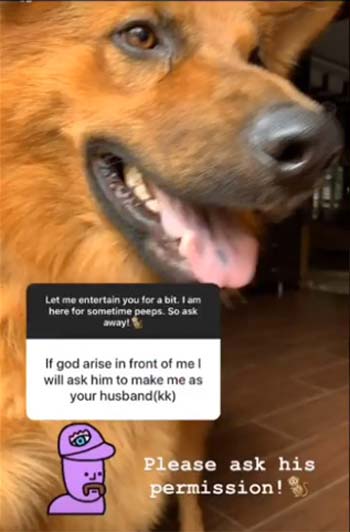