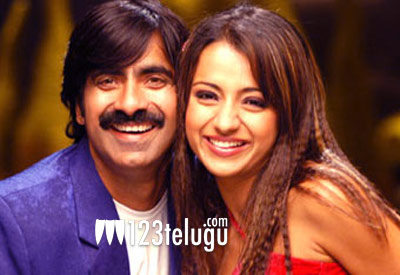 Starring Akshay Kumar, Kajal Aggarwal and Paresh Rawal in lead roles, the Bollywood con caper ‘Special 26’ was a highly successful film that was released in 2013. Long back, we had reported that veteran Stunt master and Tamil star Prashanth’s father, Thingarajan, purchased this film’s remake rights for Tamil and Telugu versions.

Fresh reports are coming in that the makers have approached Ravi Teja and Trisha to reprise the roles of Akshay and Kajal. The script work has already been completed and the film will go on floors as soon as the preliminary formalities are taken care of. Ravi Teja and Trisha earlier paired up for VV Vinayak’s ‘Krishna’.

Meanwhile, Thiagarajan is also planning to remake last year’s cult hit ‘Queen’ into Tamil and Telugu. Keep watching this space for more details about these films.