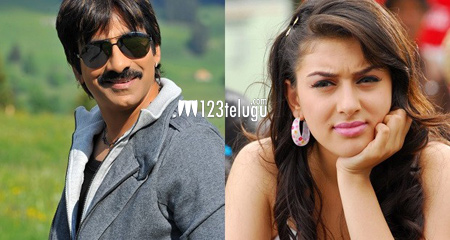 Ravi Teja and Hansika will soon be seen in a powerful action entertainer. K S Ravindra (Bobby) is directing this film and Rockline Venkatesh is producing the film. The latest news is that the film has been titled as ‘Power’ and the first look of the film is going the unveiled soon.

Incidentally, ‘Power’ was the title for Ravi Teja’s film under Meher Ramesh’s direction; however, that project never took off. The principal shooting of Ravi Teja and Hansika’s film is progressing briskly and recently a song was shot in Bangalore. Buzz is that Ravi Teja is playing the role of a police officer. K S Ravindra had written the script of Balupu and Ravi Teja is reportedly quite happy with how Power is shaping up.

Kona Venkat has written the dialogues and S S Thaman is scoring the music. Arthur S Wilson is the cinematographer.