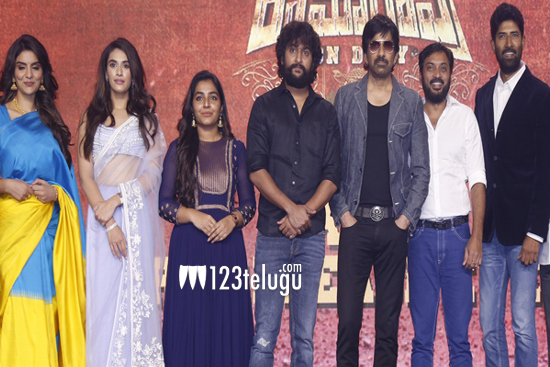 Mass Maharaja Ravi Teja is coming up with another interesting action thriller called Ramarao On Duty. Directed by Sarath Mandava, the film has Divyansha Kaushik and Rajisha Vijayan as the female leads.

Today, the pre-release event has happened in Hyderabad and Nani graced the event as the chief guest. During the event, Ravi Teja thanked each and everyone who worked along with him on the film. Ravi Teja mentioned that Venu Thottempudi and he had to do Swayamvaram but that’s not happened but worked for this film.

Ravi Teja said that the entire cast and crew worked are new to him and said everyone worked hard to bring out the best output. “Ramarao On Duty is a different film and my characterisation is also different. Everyone will enjoy the flick,” noted Ravi Teja.

Speaking about Nani, he called him a sensible actor and called him one of the finest South Indian actors. Ramarao On Duty also has Nassar, Tanikella Bharani, Pavitra Lokesh and others in key roles. Produced by SLV Cinemas and RT Teamworks, the flick has the music composed by Sam CS. The flick will hit screens on July 29, 2022.