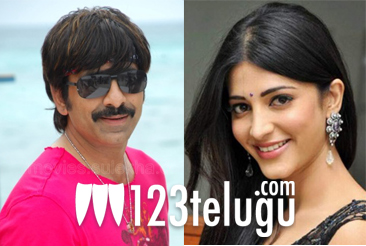 Ravi Teja and Shruti Haasan will soon be seen in a film titled Balupu. Gopichand Malineni is directing the film and Prasad V Potluri is producing the film under PVP Cinemas banner. The film’s shooting began in November and some key scenes were shot on Ravi Teja,        Shruti Haasan and Brahmanandam. The film’s second schedule will begin from December 15 in Vizag and this schedule will go on till December 30. Several key scenes in the film will be shot in this schedule. Anjali is playing the second lead role opposite Ravi Teja and Adivi Sesh will be seen in an important role. S S Thaman is scoring the music. The film will hit the screens in mid 2013.