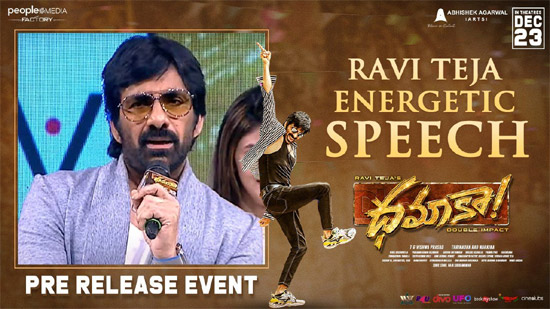 Mass Maharaja Ravi Teja is ready with his next release Dhamaka. Directed by Trinadha Rao Nakkina, Sreeleela is the leading lady. The pre-release event was conducted today in Hyderabad. Speaking on occasion, Ravi Teja said that his director is very much confident in the film.

Ravi Teja said that producer Vivek Kuchibotla always keeps smiling and added that he wants to work with him again. Ravi Teja wished the entire team the very best ahead of the release. Dhamaka has Tanikella Bharani, Jayaram, Rao Ramesh, Chirag Jani, Ali, and Sachin Khedekar in pivotal roles.