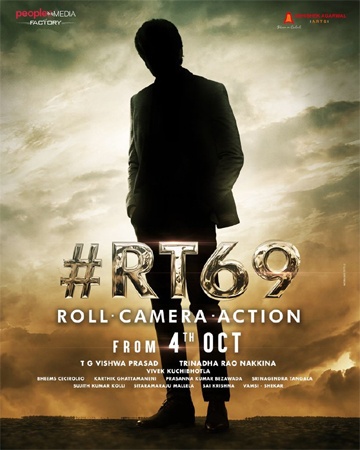 Mass Maharaja Ravi Teja is in full swing with the blockbuster success of Krack. The actor has been doing some interesting projects and here comes an official announcement regarding his 69th film to be directed by Trinadha Rao Nakkina.

The news is that it will begin its shoot from 4th October. Billed to be an out-and-out entertainer, the film tentatively titled #RT69 will be mounted on a grand scale by People’s Media Factory and Abhishek Aggarwal Arts.

TG Vishwa Prasad will produce the movie, while Vivek Kuchibhotla is the co-producer. Prasanna Kumar Bezawada has penned the story and dialogues for the film, while Bheems Ceciroleo will score music.