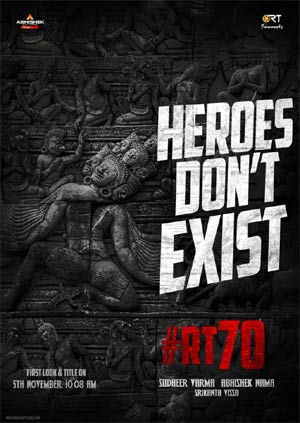 Hero Ravi Teja’s 70th film has been announced officially this morning. This as-yet-untitled film’s first look poster and title logo will be unveiled on November 5 at 10:18 AM. The announcement was made through an intriguing poster that features the tagline “Heroes don’t exist”. The ancient temple sculptures in the backdrop of the poster raise the curiosity levels.

Ravi Teja’s 70th film, touted to be a concept based action thriller, will be directed by Swamy Ra Ra and Keshava fame Sudheer Varma and produced under Abhishek Nama’s Abhishek Pictures and Ravi Teja’s RT Teamworks banners. Srikanth Vissa has penned a powerful story. More details about the film’s cast and crew will be out on November 5. Stay tuned for further updates.