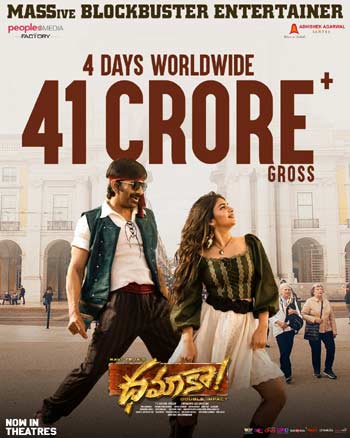 Energetic actor Ravi Teja’s latest movie Dhamaka is doing exceptional business at the box office everywhere. Opened to solid reviews, the action entertainer has been refusing to slow down at the box office.

It’s understandable that Sunday was a holiday and the Christmas festival also helped the movie to make such a solid business on its third day. However, the movie didn’t see much drop on day four. To say, the day four numbers are equal to day one collections.

In its four days run, Dhamaka collected a worldwide gross of Rs 41 crores. Interestingly, several theatres saw housefull boards and the occupancy is very impressive in other territories too. Also, Dhamaka surpassed the $250K mark at the US box office.

The film directed by Trinadha Rao Nakkina and produced by TG Vishwa Prasad will not have a big competition until the Sankranthi biggies arrive. So, the movie will have a dream run for a few more days.