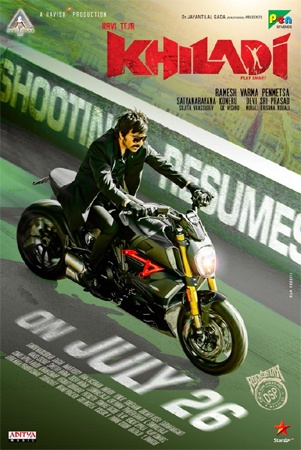 Ever since the launch of the stylish and action-packed teaser, there has been a lot of buzz around Ravi Teja’s high budget action thriller, Khiladi. The film’s shooting was stalled due to the lockdown, and the actor chose to kick-start Ramarao on Duty before resuming Khiladi.

Now, the latest updates reveal that Khiladi’s shooting is all set to resume from the 26th of July in Hyderabad. A super cool poster has been released to announce the same. Young beauties Meenakshi Chaudhary and Dimple Hayathi are the heroines of Khiladi.

Being directed by Ramesh Varma, Khiladi is produced by Koneru Satyanarayana. DSP is scoring the soundtrack.