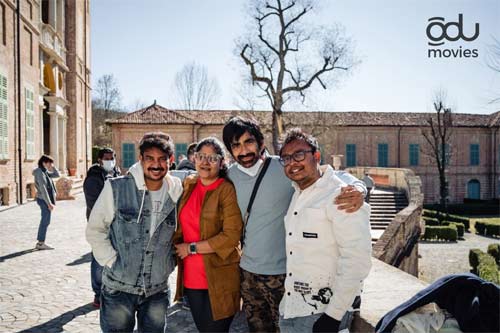 Star hero Ravi Teja’s upcoming action entertainer Khiladi’s unit has been camping in Italy and shooting in several picturesque locations for the last couple of weeks. Ravi Teja and the film’s leading ladies Meenakshi Chaudhary and Dimple Hayathi have shot for several crucial scenes and action episodes in this ongoing schedule.

Khiladi’s Italy schedule is progressing at a brisk pace and the unit will wrap up the ongoing schedule and return to Hyderabad by March end. Touted as an official remake of the yet-to-release Tamil thriller, Sathuranga Vettai 2, Khiladi is being directed by Ramesh Varma and produced jointly by Koneru Satyanarayana and Jayantilal Gada. Devi Sri Prasad is scoring the soundtrack for the movie, which is releasing on May 28.