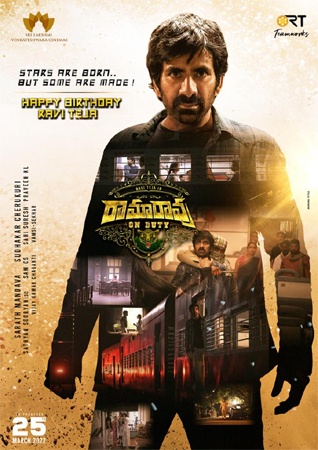 Mass Maharaja Ravi Teja is coming to entertain audiences with unique action thriller, Ramarao On Duty. Directed by debutant Sarath Mandava, it is gearing up for its theatrical release.

The makers have released a new poster to wish Ravi Teja on his birthday. The actor appears aggressive in the action-packed poster that also shows his various emotions. He can be seen with his wife in one image, while his family can be seen in another.

While one poster sees Ravi Teja busy with his work in office, we can also observe him in action in some other image. The other image shows burning train. The poster indeed suggests Ramarao On Duty is a film of all emotions and will have elements for all sections.

Divyasha Kaushik, Rajisha Vijayan are playing the female leads in this movie, which is inspired from true incidents.

Venu Thottempudi, Nasser, Sr Naresh, Pavitra Lokesh, Tanikella Bharani, and others are playing key roles in this film, which will be hitting the big screens on March 25, 2022.

Produced by SLV Cinemas LLP and RT Teamworks, the movie’s music is composed by Sam CS while Sathyan Sooryan cranked the camera.