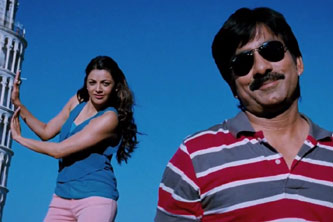 Mass Maharaja Ravi Teja’s romantic entertainer ‘Sarocharu’ is on track for release on December 21st. We just spoke to Producer Priyanka Dutt and she has confirmed that the movie is going to hit the screens on that day for sure. We have also heard a buzz that Dr. Dasari Narayana Rao’s Siri Media is going to release the movie in many areas of Andhra Pradesh.

‘Sarocharu’ has Ravi Teja in the company of Kajal and Richa Gangopadhyay. Devi Sri has composed the music and the audio album has been released into the market recently. Parasuram has directed the movie and Ashwini Dutt’s banner ‘Three Angels Studios Pvt Ltd’ is producing the film.