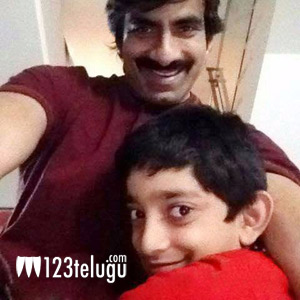 After a long gap, Ravi Teja is going to be seen in two back-to-back movies, Raja The Great and Touch Chesi Chudu. Of these two, Raja The Great will be hitting the screens first, on October 12th. The film’s teaser was received well by the fans of the Mass Maharaja.

Now, according to the latest reports, Ravi Teja’s teen son, Mahadhan, will be making his acting debut with Raja The Great. Interestingly, Mahadhan will be seen as the young Ravi Teja in the movie. Apparently, director Anil Ravipudi and producer Dil Raju were keen on casting Mahadhan in the film.

Mehrene Pirzada is the film’s leading lady and Sai Kartheek is the music composer. Ravi Teja will be seen in the role of a visually impaired man.