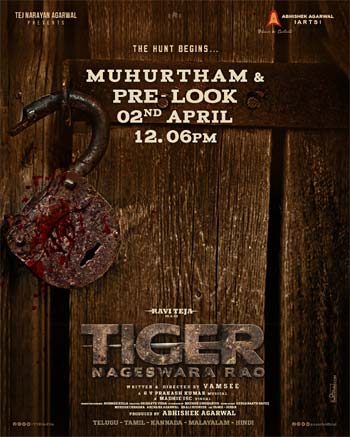 Mass Maharaja Ravi Teja-starrer Tiger Nageswara Rao is one of the most-awaited movies in recent times. Written and directed by Vamsee, the movie has made the headlines again.

Today, the makers of the movie have officially announced that Tiger Nageswara Rao will be launched with a grand pooja ceremony on April 2, 2022, and also hinted that the pre-look of the movie will also be announced on the same day at 12:06 PM.

Produced by Abhishek Aggarwal under his home banner, Abishek Agarwal Arts, the movie will be made in Telugu, Tamil, Kannada, Malayalam and Hindi. GV Prakash Kumar is roped in to compose music for this pan-Indian movie.