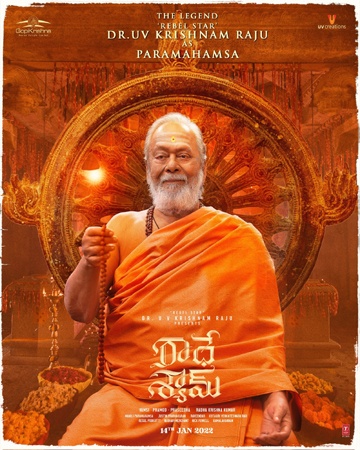 The pan-India movie, Radhe Shyam featuring Prabhas and Pooja Hegde is undoubtedly one of the most anticipated Tollywood films releasing next year.

Today, the makers have officially announced that the veteran actor, UV Krishnam Raju garu is roped in to play the character Paramahamsa, a saint. A first look of the Rebel Star has also been unveiled.

Earlier, Prabhas and Krishnam Raju shared the screen in Billa and Rebel movies.

Directed by Radha Krishna Kumar, the expectations are high on this sci-fi romantic drama, which is going to release in 5 Indian languages on January 14, 2022.