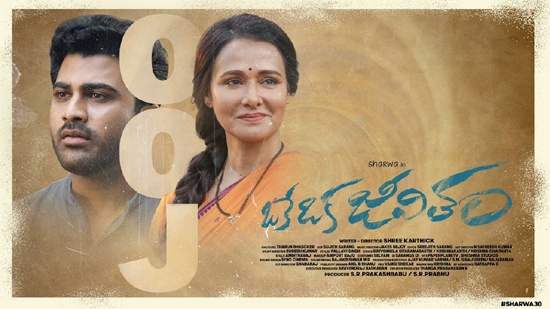 Tollywood’s young and promising hero Sharwanand’s milestone 30th film Oke Oka Jeevitham under the direction of debutant Shree Karthick is gearing up for its release. The film’s teaser and Amma song have already gained appreciation.

Today the team has officially announced that the film releases on September 9th. The release glimpse shows Sharwanand as a musician who’s in despair and is unable to concentrate on his work. Nasser who’s a scientist does experiments to invent the time machine. The final visuals show Sharwanand in his school days taking a photograph with his mother and the Amma song in the background gives an emotional touch to the sequence.

The film also stars Amala Akkineni playing Sharwanand’s mother, and Ritu Varma as his love interest. Popular production house Dream Warrior Pictures is making its debut in Telugu through this film in which Jakes Bejoy is the music director. This is a bilingual film that will have a simultaneous release in Tamil as ‘Kanam’.