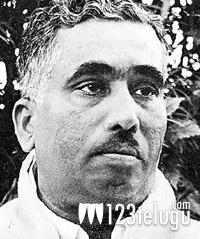 If you start recollecting some of yesteryear’s land mark movies in Tolywood then Dongaramudu, Sri Krishnarjuna Yuddham, Jagadeka Veeruni Kadha, Mayabazaar and Pataala Bhairavi are some names which will surely cross our minds. All these movies were made by the iconic director K V Reddy who completes his 100 completes his 100th birth Anniversary today.

K V Reddy who was born in the year 1912 in a small village of Tadipatri in Anantapur District. He made his directorial debut with the mythological movie ‘Bhakta Potana’ way back in 1942. K V Reddy went to on to make some landmark films which are still afresh in our minds. Speaking on this occasion, critically acclaimed director and K V Reddy’s assistant of those times Singeetam Srinivasa Rao said that K V Reddy was a much disciplined and hardworking man who gave lot of importance to his scripts. He would always be remembered as a man who have given some landmark films in Telugu Film History and as a man with creative genius.