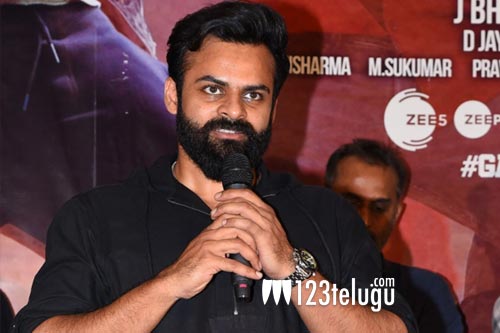 The Gaana of Republic musical event of Sai Tej and Aishwarya Rajesh’s soon-to-release social drama, Republic, took place last night in Hyderabad. During his speech, Sai said that it has been so many days since he watched a song on a big screen.

“Not just my song, but it’s a different high to watch any film song on the big screen. The happiness in watching an actor’s performance on a big screen is unmatchable. We will Republic only in cinemas first,” said the Mega hero. Sai went on to thank his director Deva Katta for scripting a powerful role and story. Sai also said that to have Manisharma score for his film has been his childhood dream.

Lastly, Sai thanked Republic’s producers Bhagawan and Pullarao and Zee Studios for bankrolling the project without compromising. The makers will be announcing the film’s release date very soon.