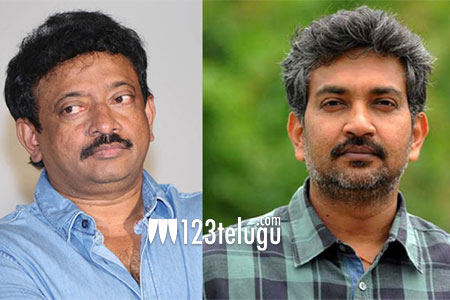 It’s well known that RGV is extremely fond of SS Rajamouli and for the past few years, he has been praising the ‘Baahubali’ director in his own unique way on Twitter. Now, their latest conversation has once again attracted a lot of attention on Twitter earlier today.

It started with RGV’s tweet saying, “The ugly is the beastly me and @ssrajamouli is looking more sexier than the beautiful #baahubali2.” Rajamouli, who knew what was coming, pleaded the filmmaker to let him be and not drag him into another Twitter storm and said, “Ayyaaa…nannu oggeyyandayyaa….😓😓🙏🙏.”

However, RGV didn’t give up and joked that Rajamouli can’t be so modest all the time. “@ssrajamouli sir overwrought modesty is more beautifully uglier than arrogant pride in its clothed and dishonest nakedness🙏🙏🙏,” RGV said, to which Rajamouli replied that he was contradicting himself because of his love for complicated tweets.

But it looks like, RGV had the last laugh in this conversation when he finally admitted that he’s going to watch Baahubali 2 on the first day of the release. “@ssrajamouli Sir contradictions are a way of simplifying complexities .I am booking tickets of BB2 to watch 4 shows continuously on 1st day,” RGV tweeted.