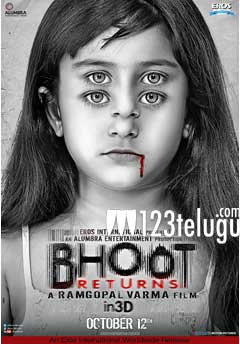 RGV’s upcoming film Bhoot Returns is all set to be dubbed in Telugu and it has been titled as Boochi. The film is a sequel to a hugely successful horror film Bhoot which RGV had made back in 2003. J D Chakravarthy, Manisha Koirala and Madhu Shalini have played the lead roles in Bhoot Returns. Interestingly, the film’s poster, which was unveiled few days ago, featured a girl with two noses and four eyes to create an optical illusion. Jitendra Jain has produced the Hindi version and Eros International is distributing the film across India. There’s a lot of buzz surrounding the film in Bollywood since it’s being touted as a comeback film for Manisha Koirala and J D Chakravarthy is also acting in a Hindi film after a long time. Bhoot Returns is going to be released in 3D format on October 12, while the Telugu version Boochi is going to hit the screens on October 26.