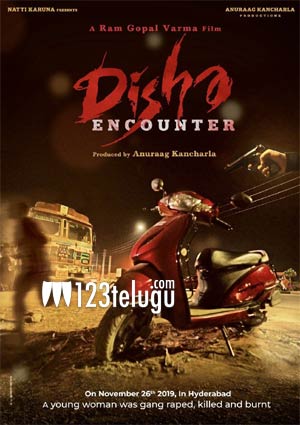 Ram Gopal Varma’s controversial film on the horrific Disha case, Disha Encounter, has been stuck in legal troubles since last year. RGV’s bid to release the film on November 26 on Disha’s first death anniversary was halted by the High Court in Hyderabad.

Now that theaters across the twin Telugu states are gearing up for film screenings after the lockdown, RGV was again planning to release the film at the earliest. But the HC has thwarted his plans yet another time. Hearing a petition filed by Disha’s parents against the film’s release, the HC has stalled Disha Encounter’s release temporarily for 2 weeks until the next hearing.

During yesterday’s hearing, Disha Encounter’s makers told the court that they have changed the film’s title to ‘Asha Encounter’ and that the censor panel had even passed the film for screening with a certificate.