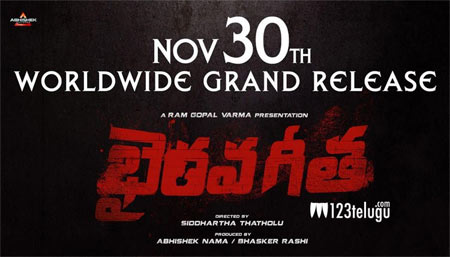 It’s well known that Ram Gopal Varma is soon going to present an intense rural love story, titled Bhairava Geetha. The film is made as a Kannada-Telugu bilingual and it features Kannada star ‘Daali’ Dhananjaya and debutant Irra Mor as the main leads. Bhairava Geetha’s story revolves around caste killings.

Bhairava Geetha was supposed to hit theaters on November 22. But according to the latest updates, the film will now be opening in cinemas on November 30. The film will also be released in Tamil and Hindi. Debutant SIddhartha has directed the movie and popular Tollywood producer Abhishek Nama is distributing the film.