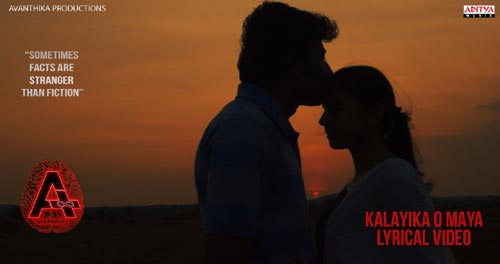 The makers of the upcoming thriller, A, released a romantic number from the movie on a popular FM channel this evening. The song is titled ‘Kalayika O Maya’ and it has been penned by Ananth Sriram and composed by Vijay Kurakula. Deepu and Pavani have crooned the song beautifully.

‘A’ features young actors Nithin Prasanna and Preethi Asrani as the main leads. Touted as a unique concept-oriented thriller, the film has been directed by debutant Yugandhar Muni and produced by Geetha Minsala under Avanthika Productions banner. PVR Pictures is releasing the film worldwide on February 26.