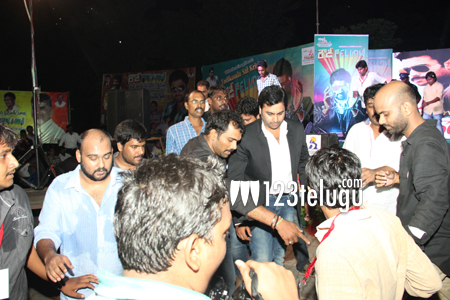 We all know that the audio of Nara Rohit’s upcoming film Rowdy Fellow was launched recently by Andhra Pradesh Chief Minister N. Chandrababu Naidu. The audio has received good response from the audience and to celebrate this, the filmmakers have organized a platinum disc function on Sunday at a popular resort near Vijayawada. Interestingly, the makers have expected around 2000 members for this function but they were shocked to see around 5000 people at the function. The complete unit is overjoyed with this overwhelming response.

Lyricist Krishna Chaitanya is making his debut as a director while Vishakha Singh and Nandini Rai will be seen as female leads. The film will have Nara Rohith in a brand new look and the genre is said to be an action comedy. Aravind is the cinematographer of the film and Sunny M R has composed the music.