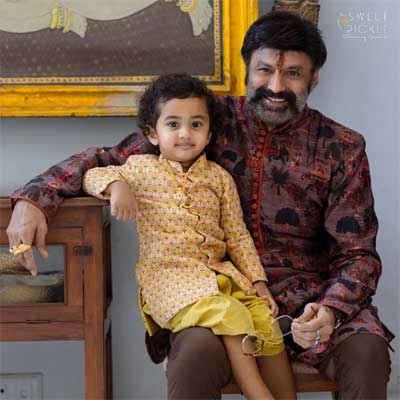 It is well-known that Nandamuri Balakrishna has two daughters. While the elder daughter Brahmani was married to Ex-cm Chandrababu Naidu’s son Lokesh in 2007, the younger daughter Tejaswini got married to GITAM University CEO Sri Bharat in 2013.

Meanwhile, a photograph of Balayya posing with Tejaswini’s son has been trending on social media. Seen in a royal look, Balayya is seen with his cute grandson. Nandamuri fans are loving the way Balayya and his grandson are dressed up in the picture.

On the professional front, Balayya recently resumed the shooting for his upcoming film under Boyapati Sreenu’s direction.