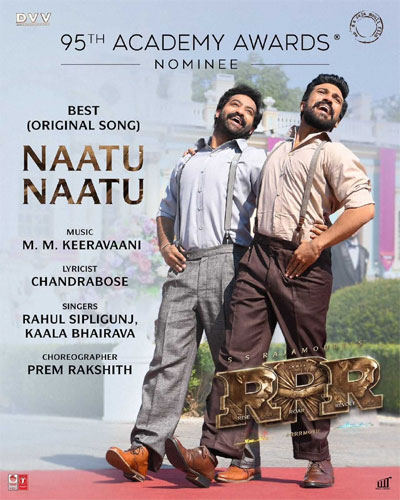 The day all Indian movie fans have been waiting for is finally here. The PAN Indian blockbuster RRR (Roudhram Ranam Rudhiram), directed by the master storyteller SS Rajamouli created history by scoring a nomination at the prestigious Oscars.

This NTR- Ram Charan starrer scored a nomination in the category of Best Original Song for Naatu Naatu. Penned by Chandrabose, M.M. Keeravani scored the music, and Rahul Sipligunj and Kaala Bhairava crooned it. Charan and Tarak made the entire world go berserk with their crazy steps. RRR now became the first south Indian film to achieve a nomination at the 95th Academy Awards.

The other Indian films that scored Oscar nominations to date are Mother India (1957), Salaam Bombay (1988), and Lagaan (2001), but they were nominated in the international feature film category. The White Tiger (2021), featuring Priyanka Chopra, scored a nomination for Best Adapted Screenplay. RRR team’s immense effort in bringing back the glory of Indian cinema has paid off big time with this accomplishment.

Movie lovers across the country are expressing their happiness and congratulating the team of RRR for this glorious achievement. None imagined that Telugu cinema could come this long, but Rajamouli has made it possible with the global blockbuster RRR.

If the action drama manages to win the award, it would be the first-ever Indian flick to do so. But we need to wait till March 13, 2023, to know the outcome. We at 123Telugu express our hearty congratulations to the RRR team for making every Indian cinema lover hold their head high on the global platform.