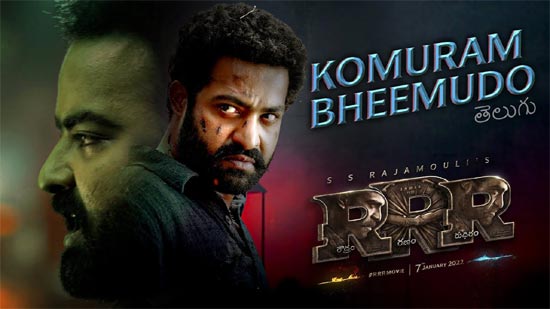 The promo of the 4th song from the magnum opus, RRR, has been released today. Titled ‘Komuram Bheemudo’, the emotional song was sung by the singer, Kaala Bhairava.

The music video, which featured Kaala Bhairava, has soulful lyrics about Komuram Bheem, played by Jr NTR. They are penned by renowned lyricist, Suddala Ashok Teja. Besides, the emotionally spellbinding song has been elevated with the vocal of the singer.

The special music video will be released at 4 PM tomorrow on YouTube in 5 languages.

Directed by the maverick filmmaker, SS Rajamouli, the movie, which has Ram Charan, Alia Bhatt, Ajay Devgn and others in key roles, is all set to release on January 7, 2022, worldwide.